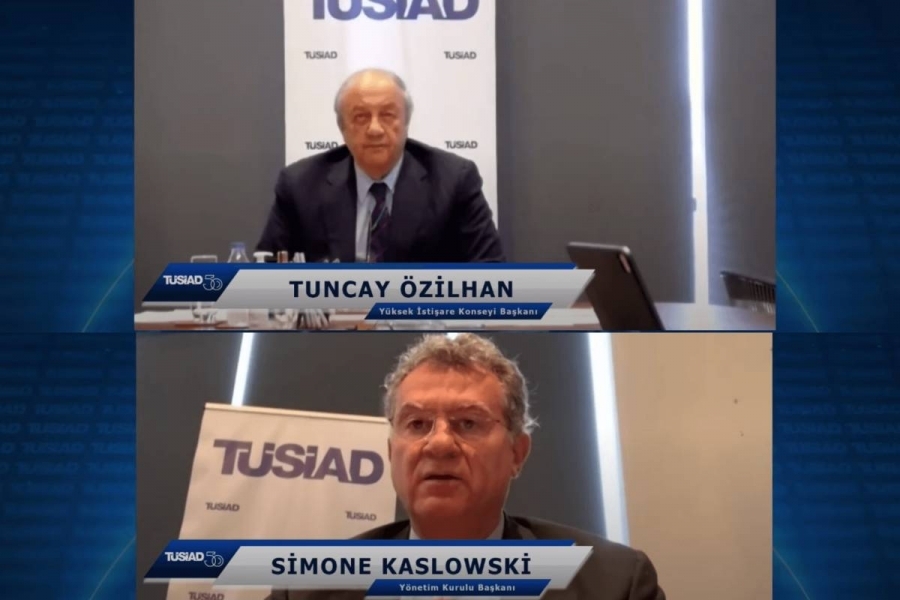 The President of the Turkish Industry and Business Association (TÜSİAD) Simone Kaslowski delivered opening remarks at the High Advisory Council meeting, which convened online. The High Advisory Council is a biannual deliberative conference where the business world takes stock of domestic and global political and economic developments and offers suggestions to policy makers from a business perspective.

In his remarks, President Kaslowski reiterated the Turkish business world’s calls for reforms, strengthening of democratic standards and the rule of law, and the reinvigoration of the EU accession process. Below are excerpts of his remarks:

On climate change and the environment:

“Seas, forests, and rivers are among our greatest assets. The prosperity these assets bring can only be sustained if they are protected. Even with our country’s full agenda, we must not ignore the sustainable development issues that are critical to our future.

“Climate change remains one of the most significant issues facing the world. The West is shaping the fight against climate change as an opportunity to address another set of challenges simultaneously. As measures to address climate change are implemented, there will be a great wave of economic development. Major investments and financing will flow to countries that have transitioned to a circular economy, have a carbon neutral plan, and observe principles of sustainability.

“The latest environmental disaster took place in the Marmara Sea. The inclusion of input from academia, the business world, and non-governmental organizations in the work of the Presidency’s Marmara Sea Action Plan Coordination Board is vital to the success of the initiative. With this understanding, TÜSİAD will work to continue to be part of the solution in the effort to fix environmental problems.

“It would be a very meaningful step for our country to approve the Paris Agreement and prepare a carbon-neutral roadmap for 2050 before the COP26 United Nations Climate Change Conference in November. It is important for Turkey’s Nationally Determined Contribution to be based on this roadmap. The infrastructure package introduced by the U.S. and the infrastructure fund/investment project discussed at the G7 summit demonstrate that the green economy will be a top priority in the coming period.”

“The European Green Deal, which outlines the growth strategy for the EU, our biggest trading partner, will have consequences for our industry as well as our service sector. We think that it is essential to update the Customs Union with the EU to take into account green as well as digital transformation.”

“The cost of deinstitutionalization is constantly increasing. With each passing day, we see more clearly how this breakdown in institutions has seriously damaged the functioning of our administrative system, the welfare and peace of our society, and the appearance, reputation, and reliability of our country in the markets. Questions about the reliability of official data, the lack of authority of competent institutions, and the failure of adherence to merit-based criteria have made communication and interaction with the outside world difficult and hindered the transition to a strong economic outlook.

“There is a high likelihood that Turkey reaches the end of 2021 with 5.5-6% growth. Growth in our major export markets and the effects of last year’s credit growth rates has had a positive impact. However, the nature of this growth has been far from the criteria needed for sustainability. The composition of Turkey’s growth has changed a great deal over the years. As the share of agriculture decreased, the share of industry, construction, and tourism increased. Although we have achieved cyclical growth at a high rate, we are far below the levels we need when evaluating three-year averages. Our long-term growth is losing momentum and our job creation capacity is decreasing. Under a broad definition, our unemployment rate is around 25-30%. That means almost one third of the labor force is unemployed.

“On the other hand, there is discrepancy between official inflation and perceived inflation, which is difficult to explain. What we are feeling is actually a dramatic loss of welfare. The unmanageable inflation expectations, the lack of predictability in the Central Bank’s policies, and the fact that we have not reached a consensus on inflation targets make it extremely difficult to achieve price stability. At the end of the day, our loss of welfare as a country continues to accelerate. All of this limits the flexibility of the economy and the number of economic tools we can use to adapt to any global shocks, such as the pandemic.

“The series of summits held in recent days have given us an idea of the trajectory of the West, the future of the transatlantic alliance, the dimensions of cooperation between the U.S. and the EU, the state of relations between Washington and Moscow, and the position of China in the global order. Looking to erase the negative effects left by the previous administration, President Biden is working to strengthen his country’s alliances. He has emphasized that he views the values and principles of the Western alliance as the cornerstone of this process.

“Europe and the United States are in close cooperation with each other, including on issues that relate to Turkey. We believe that we need to end our deep isolation in the international arena. We expect relations with our allies and neighbors to be improved, Turkey’s strategic identity to be in line with our contemporary values, and the relationship with the EU to progress towards the goal of full membership by overcoming the trap of transactionalism. The realization of these goals requires expanding the scope of rights and freedoms in Turkey and devoting more attention to our institutional structure.

“The removal of restrictions on individual rights and freedoms, the prioritization of respect for rule of law, and compliance with the decisions of the European Court of Human Rights are crucial steps for a new era of restoration. The fact that the Council of Europe, of which Turkey is a founding member, has on its agenda opening a violation procedure against Turkey for its failure to implement ECHR decisions cannot be an acceptable position for Turkey.

“Along these lines, we hope that the meetings with other allied leaders and President Biden will open the door to the resolution of accumulated problems. Beyond that, we would also like to ensure that the agreement for Turkish forces to serve in Afghanistan after the withdrawal of the U.S. and NATO will be evaluated in detail and that all necessary conditions will be implemented to guarantee the safety of our troops.”

“Institutions are also important for the proper functioning of the democratic system. Effective and transparent politics are the first condition for the healthy functioning of our democracy. Political parties are the most important element of democracies. Politics should be conducted in an open environment – not one that bans political parties - that furthers accountability, that regulates the financing of politics according to ethical standards that is based on a legal infrastructure that complies with EU and universal standards. That would surely strengthen our democratic system.”

“In almost all of our meetings, we emphasize the importance of women’s rights. We want and expect our country to return to the Istanbul Convention. We also expect our law enforcement and judicial system to take the strongest possible stance in preventing violence against women. The realization of women’s equality in education, employment, and management should be an integral part of our progress towards a developed country.”

The President of the High Advisory Council Tuncay Özilhan echoed these remarks:

“Yes, according to GDP data, we are doing quite well. Turkey demonstrated positive growth performance in 2020 and in the first quarter of 2021 thanks to monetary and credit expansion undertaken in light of the pandemic. But this growth does not foster employment. In addition to the difficulties faced by the unemployed, retired individuals and those without jobs are unhappy due to the high cost of living. High inflation reduces purchasing power. Those who lost their jobs due to the pandemic, who went into debt, whose welfare decreased, traders, farmers, SMEs, and entrepreneurs who do business and comply with the rules of fair competition are not getting their proper share of this increasing growth. All of this makes it difficult to be united – to address the challenges we face as a country together.

“Unfortunately, we were unable to make good use of the time period in which there were no inflationary pressures globally. If we had been able achieve the success we had during the fight against the pandemic a month or two earlier, our tourism revenues could have been higher, while the current account deficit and the pressure on the value of the Turkish Lira could have been lower. If monetary policy had been implemented in a predictable way, in line with the goal of combatting inflation, it would have been possible to preserve the value of the TL while keeping inflation and interest rates lower.

“The struggle for women’s equality continues. We believe that the withdrawal from the Istanbul Convention does not aid in the fight to end violence against women. We also believe that it is impossible to achieve a just and happy society without providing equal opportunities for women in economic, social, and political life.”

“Instead of an unsustainable approach to growth that ignores climate change and the environment, we must implement a strategy for growth that takes care to protect the environment, as TÜSİAD has advocated for a long time. I invite our entire business community to work towards the goal of a circular economy, which consumes less, utilizes resources more efficiently, encourages recycling within a product’s life cycle, reduces the cost of raw materials, and includes practices such as sustainable product design. A greener perspective on growth is not a utopian approach. If we look at the EU’s new growth strategy, we see that this approach brings with it a number of opportunities for Turkey.”

On rule of law:

“TÜSİAD has expressed our concerns regarding the rule of law in our country for a long time. As our president Muharrem Kayhan said 23 years ago, we will stand by all efforts for a clean society and clean politics as we have in the past. It is our greatest wish that current developments will serve to advance our rule of law and democratization. If we can tackle the issues important to our democracy with a structural and principled approach, confidence in the political system will be restored. Thus, instead of emphasizing the rule of law and democracy, we will have the opportunity to center our conversations around the details of economic issues.”